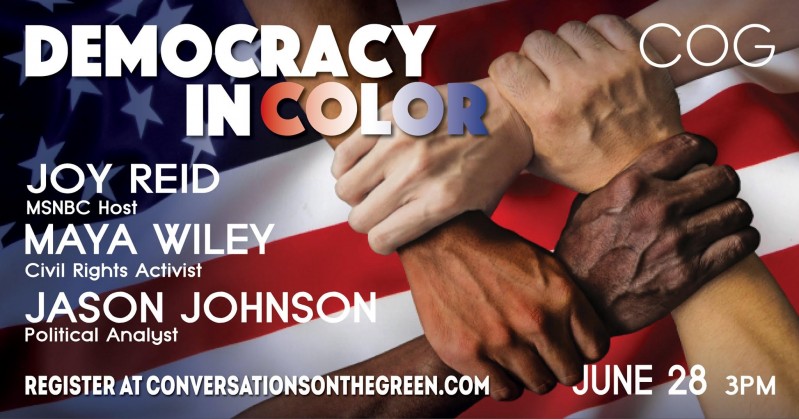 Three of the nation’s leading luminaries will come together on June 28th for a free virtual discussion examining the future of race in America and the inevitable role it will play inthe 2020 elections. Entitled “Democracy in Color,” the forum is the third of ConversationsontheGreen’s eighth season.

The forum is led by Joy Reid, an author, historian, and MSNBC host. A national political correspondent, Reid is also the author of the best-selling book “Fracture: Barack Obama, the Clintons and the Racial Divide.” Educated at Harvard University, Reid is an expert in the art of politics, having served as the Florida Deputy Communications Director for the PAC “America Coming Together” in 2004 and a Press Aide for Barack Obama in 2008. A regular contributor to “The Daily Beast,” Reid’s columns and essays have appeared in newspapers and magazines around the country. Her MSNBC program “A.M. Joy” airs on weekends from 10 AM to Noon.

Reid will be joined on the panel by civil rights activist Maya Wiley. The former chair of New York’s Civilian Complaint Review Board, an independent police oversight agency, Wiley also served as counsel to the city’s mayor, Bill de Blasio. Prior to these positions, she also founded the Center for Social Inclusion, a national policy strategy organization, and worked for a variety of social advocacy groups including the NAACP Legal Defense and Educational Fund and the American Civil Liberties Union. She is currently the Henry Cohen Professor and Senior Vice President for Social Justice at The New School and a legal analyst for MSNBC.

The panel is rounded out by Dr. Jason Johnson, who has managed legislative campaigns in Virginia, South Carolina and Maryland and is the politics editor for both The Source and The Root. Outspoken and consequentially controversial, he is a sought-after television and radio commentator. He appeared regularly on Fox News’ “The O’Reilly Factor” before it was cancelled. Now he’s often on MSNBC and frequently is quoted as a political expert by major newspapers in analysis pieces on the role of race in elections. He worked on the 2000 London mayoral campaign and has been an international election monitor in Mexico and South Africa. A tenured professor in the School of Global Journalism and Communication at Morgan State University, his courses focus on politics and international journalism.

Moderated by former NBC correspondent and national talk show host Jane Whitney, this interactive symposium will begin at 3 PM and run for 90 minutes on June 28th. The program will be live-streamed, allowing anyone with an internet-connected device to participate and ask questions.