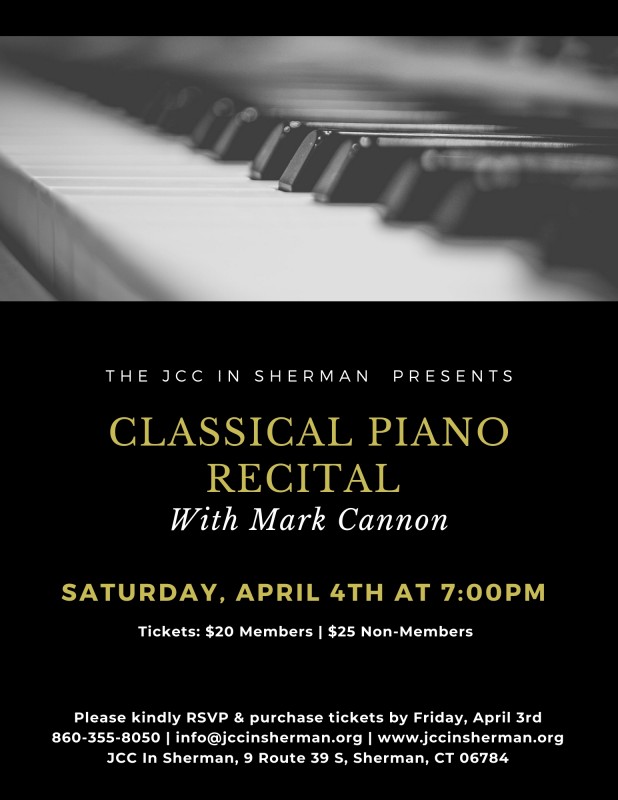 Join us  at the JCC in Sherman for a special classical paino recital with Mark Cannon on Saturday, April 4th at 7PM.  Mark Cannon is a psychiatrist in private practice in New York. Mark first became acquainted with the JCC in Sherman in 2008 when we showed the movie "They Came to Play," a documentary about the amateur piano competition held by the Van Cliburn Foundation in Texas, in which he appears. Mark gave a Q & A presentation at the showing and also a brief piano performance. The following year he returned to give an all-Chopin piano recital. He is very glad to be returning once again for this performance.

Mark was born in Frankfurt, West Germany in 1950 to a family that had survived the Warsaw ghetto and was then in Germany for 5 years before coming to America. He grew up in Queens, where he attended public schools and studied piano with "that little old lady around the corner," who, it turned out, had been a performer of some note in Russia. He then attended Cornell University and the Medical College of Wisconsin. He has continued with music study and performance all through the years, including many solo recitals and a concerto performance with the Doctors' Orchestral Society. He was fortunate to actually be reviewed once in the New York Times, quite nicely. He lives in Larchmont, NY with his wife Marcia. They also have a home in the Berkshires, where Mark continues playing in the weekly Sunday softball games (weather permitting). He is one of their longest tenured players -- this year will be his 35th -- and as he says, he's not that much worse than he ever was.

Tickets are $20 for members and $25 for non-members. To help us better plan for this event, please kindly purchase your tickets online at www.jccinsherman.org or by calling or emailing us at 860.355.8050 or info@jccinsherman.org by Friday, April 3rd.