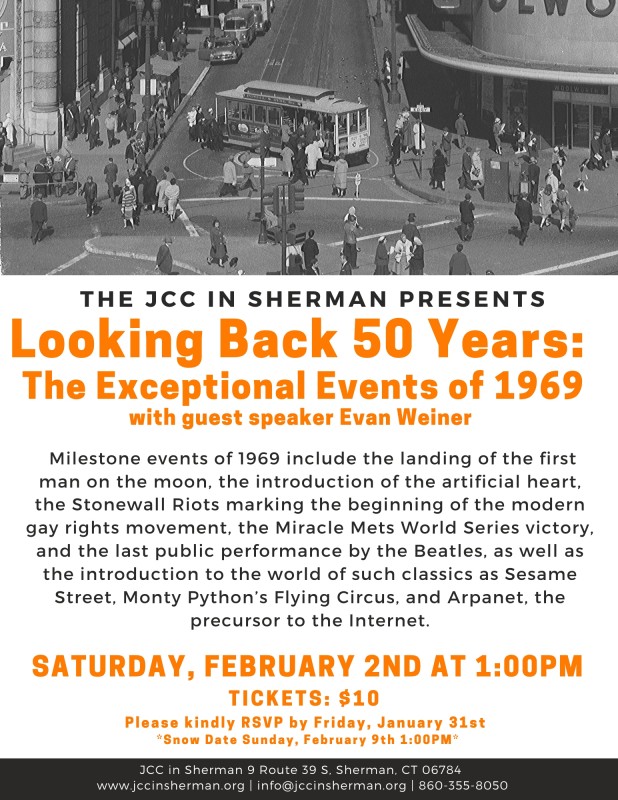 Join us on Sunday, February 2nd with a guest Speaker Evan Weiner as he talk about 1969: Fifty Years Later: The 68 Hangover, Nixon Enters The World Stage, The War Continues, Man Lands on the Moon.
Milestone events of 1969 include the landing of the first man on the moon, the introduction of the artificial heart, the Stonewall Riots marking the beginning of the modern gay rights movement, the Miracle Mets World Series victory, and the last public performance by the Beatles, as well as the introduction to the world of such classics as Sesame Street, Monty Python’s Flying Circus, and Arpanet, the precursor to the Internet.
Journalist Evan Weiner is a recognized global expert of the "Politics of Sports Business". He has a daily podcast called The Politics of Sports Business as well as a daily video podcast. He has been a regular on BBC radio as well as Talk Sport London and has been quoted in Bolivian and Australian newspapers. He also writes for the Guardian newspaper in the U. K. In the United States, he has been a radio commentator, TV pundit on MSNBC, NewsMax and ABC, he is also an author of six books and is a frequent college speaker. He won the 2010 Ronald Reagan Media Award from the United States Sports Academy. In 2015, Evan was featured on the documentary, “The Sons of Ben" about the economic fall of Chester, Pennsylvania and how the city thought a soccer team would be a key to economic revival
Please kindly RSVP by Friday, January 31st
Tickets are $10